How to Build a Relaxation Oscillator with a Transistor

In this project, we will show how to build a relaxation oscillator with a single transistor and a few other components such as a resistor and capacitor.

A relaxation oscillator is an oscillator that repeats itself over and over again from the charging of a capacitor to some event threshold and then the discharging of the capacitor.

The recharge and discharge time of the capacitor determines the time period and, thus, frequency of the signal.

In this circuit, we will connect an LED as output. Since the output signal produces oscillations, you will see that the LED flickers on and off, on and off, indefinitely.

The 2N4401 transistor is an NPN transistor. The datasheet for this transistor can be found at the following link: 2N4401 NPN Transistor Datasheet.

Relaxation Oscillator Built with a Transistor

The relaxation oscillator circuit we will build with a transistor and resistor and capacitor is shown below. 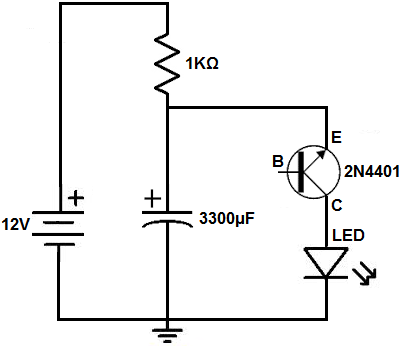 Below is the breadboard schematic version of the above circuit so that you can see the exact wiring of the circuit to the 4011 chip. 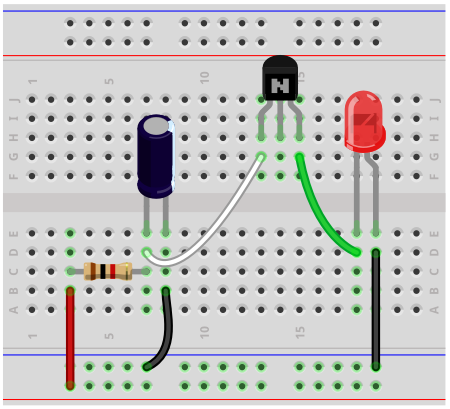 First and foremost, we use 12VDC of power for this circuit. Actually any voltage from 12V-15V will work. But voltages much below 12V will not allow the circuit to work.

We will now explain how this circuit works. So as soon as power is supplied to the circuit, the capacitor charges up through the resistor. It charges up and charges up and charges up. This represents the positive, exponential slope that is present on the first half of the sawtooth waveform. Once the voltage across the capacitor reaches a certain threshold level, the transistor is turned on. Once the transistor is turned on, it can conduct current across from collector to emitter.

And this creates the infinite sawtooth waveform.

Another point about this circuit is that the base does not need to be connected in order for the circuit to work. This is because if enough voltage is applied to the emitter junction, the emitter-base junction breaks down and the transistor conducts current. And, of course, the same can be true for a collector if enough voltage was applied to the collector and its breakdown voltage was reached. The transistor would be able to conduct current across without any power directly to the base.

There are several variations that can be done to the circuit.

To change the amplitude, you increase or decrease the supply voltage.

And this is how a relaxation oscillator can be built with a few simple components.

To see how this circuit functions in real life, see the following video below.